To be flexible in the face of change: the head of Civinity group in Latvia on choosing the right place for the office and the changes in the company

Civinity is one of the largest building maintenance and engineering solutions groups in the Baltics – it has experienced significant growth over 17 years and now includes more than 20 different companies not only in Latvia and Lithuania, but also in the United Kingdom. Andrius Bakštonas, the head of Civinity group in Latvia, talks about the company’s development trajectory, the trends in building management in recent years and how the management of Mūkusala Business Centre has managed to surprise him.

According to Andrius Bakštonas, the head of Civinity group in Latvia, the group of companies, which was originally formed in Lithuania, is currently the largest commercial structure in the field of residential and commercial real estate services. Civinity provides its customers with a full range of residential and commercial real estate maintenance services, as well as design and maintenance of engineering systems and building improvement – modernization and renovation services.

“The company was founded in the 2005. We first started operating in Klaipeda and the development has been very rapid – every two or three years there have been some new changes. Then followed Palanga, two years later – Vilnius, then Kaunas and Kretinga. All this – over the period from 2005 to 2012,” says Andrius Bakštonas. In 2014, Civinity started its operations in Latvia, acquiring the company in Jurmala and in 2016 in Riga. The Civinity Group currently includes more than 20 companies. In 2021, it also started operating in the United Kingdom.

“Civinity currently manages more than 10 million square metres. If we talk specifically about Latvia, there are about 640 residential buildings, more than 100 commercial clients – in both B2B (business to business) and B2G (business to government) sectors. We also manage more than 400 elevators,” says the head of the company, adding that for the Civinity group in general, these figures are twice as high. “Our business is quite similar in both Latvia and Lithuania, but currently Lithuania has the largest number of customers,” he says. “The share of clients in Latvia is approximately as follows: 70% of them are residential buildings, while 30% are commercial buildings, but in general the distribution between the two categories in the entire group of companies is 50:50,” says the head of Civinity in Latvia. 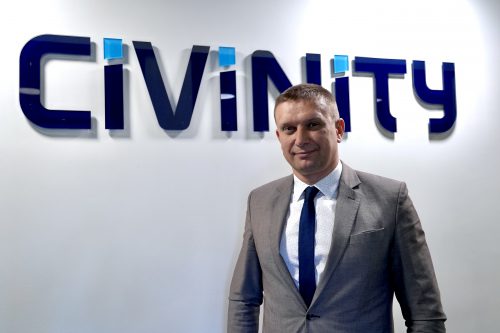 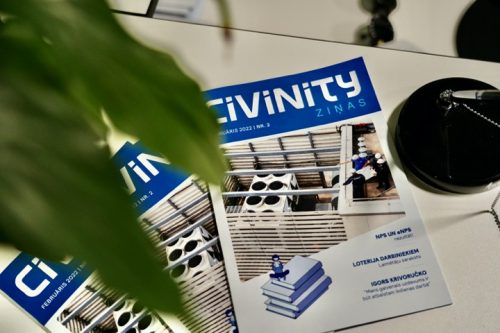 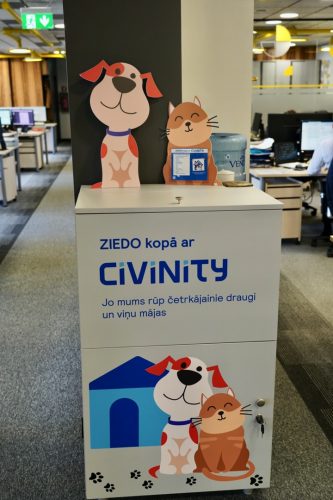 Not only an attractive price, but quality service as well

Over the last two years, the building maintenance industry has undergone various changes: the company has had to react quickly to events that have affected the whole world. “If we look at the residential sector, the situation has been stable, but as many of us spend more time at home due to the pandemic, customers have also become more demanding. If we are always at home and see every little detail, the demands on quality increase. However, people have realized that buildings need to be taken care of – money needs to be invested in time, modernization and improvements need to be made, otherwise the building loses its energy efficiency and incurs additional costs,” says Andrius Bakštonas.

“In the commercial sector, the situation is a little different, because there were times when, for example, shopping centres temporarily closed down and the amount of services needed decreased. For example, cleaning was no longer required. There have been very frequent changes in the industry, and it was necessary to react quickly – it was difficult to predict anything,” he says. “But as we are a large company and we have about 900 employees in Latvia, we have always been able to redistribute our resources. In general, at the time when the amount of work in the commercial buildings decreased, there was a higher demand for the services in the residential sector,” says the head of Civinity in Latvia about the trends of the past years.

“Of course, we have had to be very flexible, because the customer still expects good service. We look more at our responsibilities: we must not only offer an attractive price, but also provide quality services to our customers and partners,” he says. 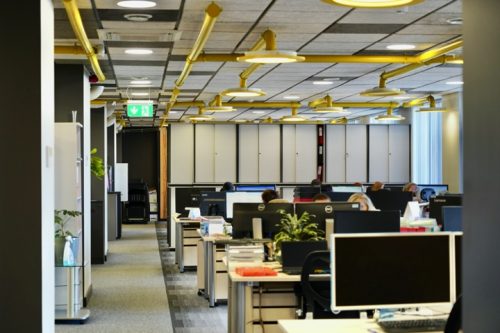 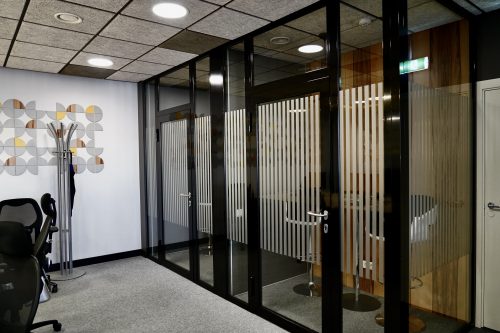 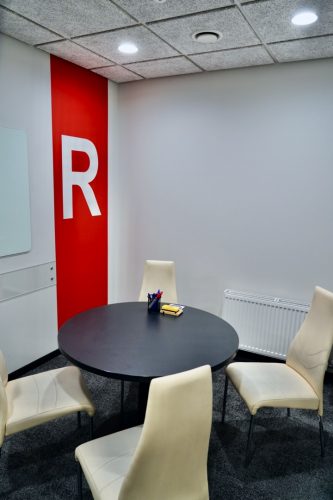 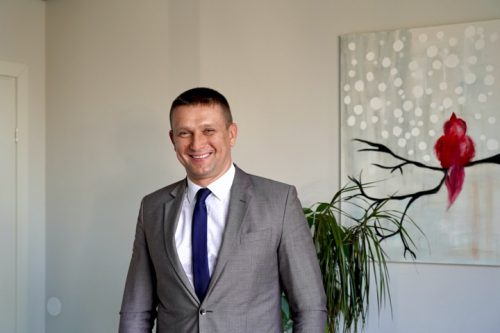 A search for a new home

“Civinty” is located in Mūkusala Business Centre – the company arrived here only in December 2020. “Until then, we were in the city centre – in a big, old building. When choosing the premises, we mainly considered the location: since we manage a lot of buildings in Riga, it was important that all employees could move around comfortably,” says Andrius Bakštonas about the choice of the new office. “Our administration has many employees – more than a 100 people, so we were careful not to lose any employees when we relocated. The employee wellbeing is one of the most important values ​​of the organization, which we have also included in our regulations,” he says.

“It was important that the building we chose in was modern, we had decided in favour of an open-space office so that employees could communicate easily with each other. The possibility to park the car, as well as the availability of the warehouse, were also important, because we have technical and cleaning departments with various materials and equipment that need to be stored,” says the head of Civinity in Latvia.

When choosing new office space, just like choosing a new home for yourself, it is important to consider not only the premises themselves, but also the environment. And the case of Civinity Latvia is no exception. “There was no shortage of lunch or relaxation options in the immediate area where the previous office was located, and it was important that these things are accessible right next to the new office as well,” he said. As Andrius Bakštonas explains, the most important thing when choosing an office is not the price – it is important that the company’s new home meets all the set requirements, and in the end MŪKU SALA turned out the candidate where all these things were available in one place. 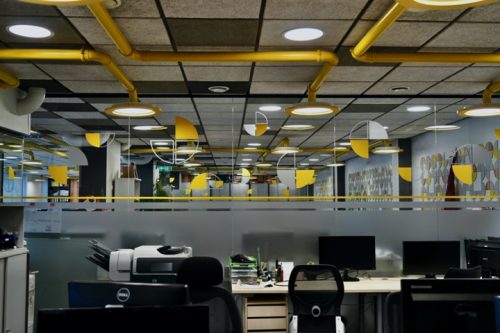 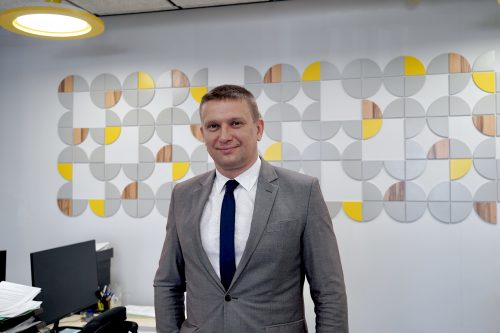 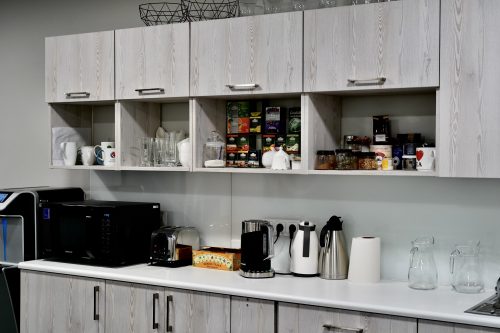 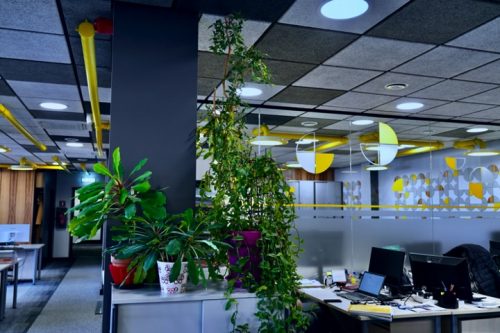 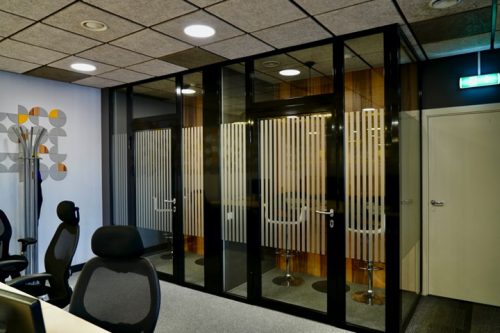 Efficiency at any time

As with many other businesses, the office is no longer a place where employees spend most of their time. However, the office is still an integral part of the company. “Currently, the office has about two-thirds of its staff on a permanent basis, and these employees are replacing each other. Currently, our staff spends three days in the office and can work two days from home. But in general, all employees can be found in the office during the working week at one time or another. I don’t think we have a single position where the employee is not needed in the office: they need to sign contracts, meet with clients and colleagues, partners,” says Andrius Bakštonas.

“About 100-120 people use the office. In general, we have fixed workplaces, but there are also several areas where the employees can go with their laptop, and there they will find everything needed for work. If our colleagues from Lithuania come to visit us, they work in these areas,” says the head of the company. There are two Civinity offices in Mūkusala Business Centre – the head office has an open-space area where most of the employees work, meeting rooms and a customer service area, whereas a separate office is dedicated to the technical staff and a separate storage area.

“We wanted our employees to have no doubt as to why we were changing everything – we took ventilation, air conditioning, lighting and the right layout of our workplaces seriously. In some places where there is more noise, we have installed sound-insulating partitions,” says Andrius Bakštonas. “All of these things are important for employees, because that’s when a person can commit to work fully and be efficient at any time. What I think is especially great at Mūkusala Business Centre that it is possible to regulate the temperature and air supply on our own, because sometimes we arrive later and leave later, and the fact that it can be programmed for every day is a big advantage,” he says.

“Mūkusala Business Centre, for its part, started preparing the premises as soon as we agreed that our office will be located here – I think that we had not even signed the contract yet, they were very eager and interested,” says the head of Civinity in Latvia. “In my experience, you always have to double check everything yourself, but in this case, the team of Mūkusala Business Centre was moving forward on its own – we felt such a strong initiative from the administration of the centre, which I think I saw for the first time in my entire career. I always pay close attention to who to work with and who to collaborate with, and here I can see that the people who work here really like for their affairs to be in order. Working with such people is very convenient,” says Andrius Bakštonas.